‘Ebony, Ivory and A Touch of Bronze” 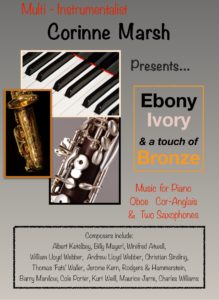 “Ebony, Ivory and A Touch of Bronze” is the title of Corinne’s programmes featuring music for piano, oboe, cor anglais and soprano and tenor saxophones. Corinne will present the programmes in a variety of venues which include schools, music festivals, societies and clubs, using the Bose L1 sound system as her “accompanist”. If you would like to hear Corinne in a venue near you, please contact her via the “Contact” page which is found in the menu section of this site. A sample programme can be viewed by clicking on the link below:

Corinne’s recordings of piano music have finally arrived! The programmes on the CD’s entitled “Light Reflections” and “Natural Reflections” are listed below. If you would like to purchase a copy of either or both of these delightful collections of music, please contact Corinne via her contact page on the menu.

The CD’s are selling at £10 each, plus postage and packaging. 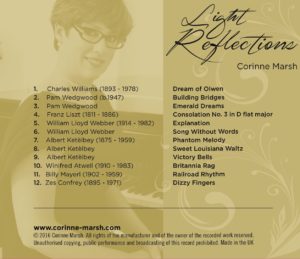 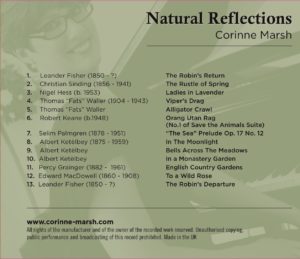 Corinne has recently spent a day in the Old Granary Studio in Beccles, Suffolk where she recorded a rangle of delightful piano music for two CD’s which will shortly be available. They will be called “Light Reflections” and “Natural Reflections”. Watch this space for news of their availability and how you can obtain your copies…

On Monday 25th April Corinne will head down to Dover to meet Fred Olsen’s cruise ship, the Braemar which was the first ship that Corinne worked on in July 2014. The Braemar is setting sail to cruise to Germany where they will travel along the Flensburg Fjord visiting Flensburg and Travemünde, then along the Trave River to the Keil Canal, arriving in Hamburg on 30th April. They leave Hamburg on the 2nd May and travel along the Rivers Elbe and Weser before arriving in Bremen on May 3rd. The ship returns to Dover on May 5th.

This is a very special cruise for Corinne as she will be travelling solo this time, presenting three concerts playing her 5 instruments: piano, oboe, cor anglais, soprano and tenor saxophones.  She has prepared three varied programmes in a range of styles which she hopes will appeal to all musical tastes. 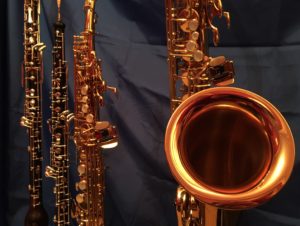 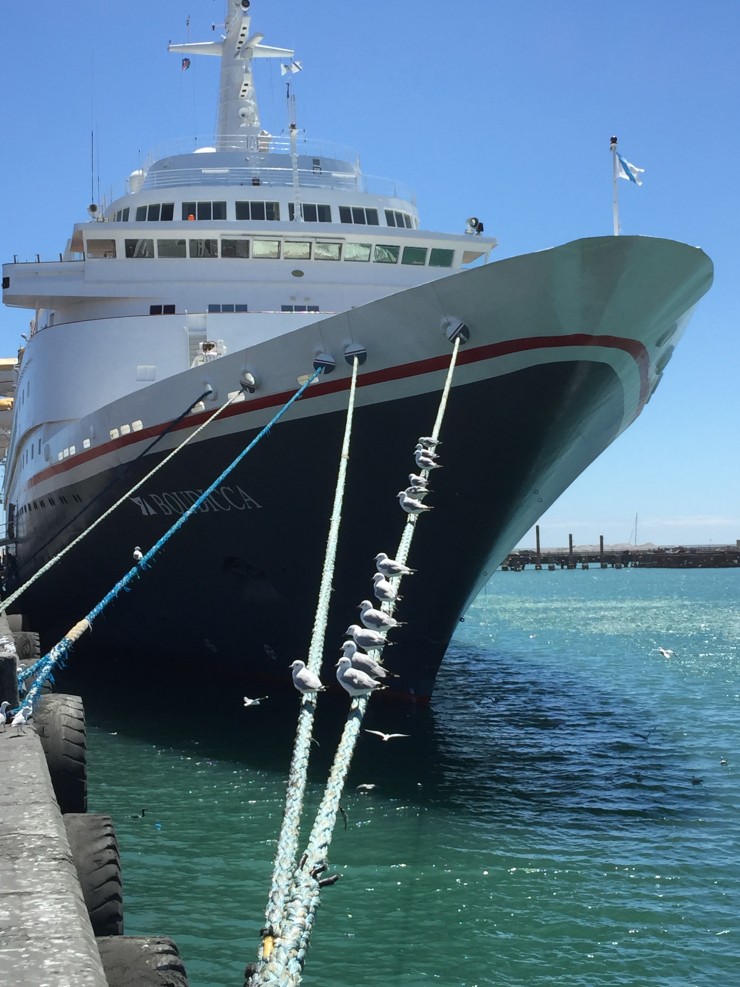 In January 2016, Corinne and Kim enjoyed one of their best cruises yet onboard Fred Olsen’s beautiful ship, the Boudicca. They gave four recitals of music for mezzo soprano and piano which included a double evening show on Saturday 23rd January 2016. Their concerts were well received by audiences who appreciated the variety of music styles on offer. Piano solos written by Chopin, Sinding, Palmgren, Grainger, Winifred Atwell, Billy Mayerl and Thomas “Fats” Waller continued to be amongst the audience’s favourites.

This cruise visited the spectacular island of St Helena where Napoleon was exiled for the last 6 years of his life; Walvis Bay and the German town of Luderitz in Namibia, and Cape Town where Corinne and Kim left the ship to fly back to the UK.

Corinne is now looking forward to a cruise to Germany on the rivers at the end of April where she will play not only music on the piano, but also the oboe, cor anglais, soprano and tenor saxophones. Her programmes will include music in a range of styles including musicals, films, jazz, swing-time, and classical favourites. 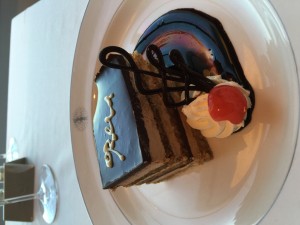 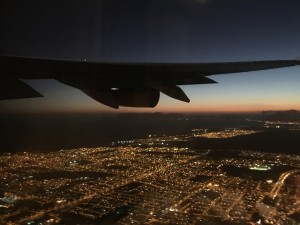 Kim and Corinne are looking forward to their next cruise with Fred Olsen and will be heading for Cape Town on 12th January 2016.  They will fly out to Mindelo in the Cape Verde Islands to meet the Boudicca. From there they will set sail for Praia (Cape Verde), visiting Jamestown, (St Helena), Walvis Bay and Luderitz (Namibia) before arriving in Cape Town on the 29th January.

On the 25th November, Kim and I flew from Gatwick to St Lucia to meet Fred Olsen’s cruise ship, The Black Watch. We were hosted overnight at the Coco Palm Resort at Rodney Bay. It was blissful to suddenly find ourselves at 32C! The following day we met the Black Watch and set sail. The cruise included visits to Basseterre on St Kitts, Gustavia on St Barthelemy, Philipsburg on St Maarten, Road Town in Tortola in the beautiful British Virgin Islands, before heading for a day in St John’s, Antigua. We stayed overnight in Ponta Delgada in the Azores before returning to Greenock, Glasgow.
Our four recitals were well received by the audiences who enjoyed the variety of styles on offer in our programmes. We rose to the challenge of performing during a Force 10 gale during which the port holes in our cabins had to be sealed with cast iron caps. The biggest challenge was trying to remain on the piano stool while the ship lurched to and fro!
We also performed in the two final evening shows in which Kim sang “Vilia” from Franz Lehar’s “Merry Widow”. Corinne was also invited to accompany the Canadian flautist, Tara Rachelle in Cecile Chaminade’s virtuosic Concertino Opus 107 which was well received by both audiences.
We arrived back in at Greenock in Glasgow on Saturday 12th December.

Corinne will accompany mezzo soprano, Kim Brown, on Fred Olsen’s Boudicca to Cape Town from 16th to 29th January. She is also booked as the Classical Act on Fred Olsen’s ship the Braemar cruising along the German Waterways from 25th April to 5th May and on The Black Watch to Iceland from 25th August to 3rd September 2016. All very exciting!