Good news! During 2018 concert pianist and multi-instrumental recitalist Corinne Marsh is looking forward to three further colourful recitals as a guest artiste onboard cruises with Fred Olsen. The first cruise, M1821, leaves from Southampton on 23rd August abroad the beautiful Braemar and heads to France and the wine region of sunny Bordeaux. Initially they’ll sail to Lorient before heading down the Gironde and Garonne Rivers before heading to Bordeaux. On the return journey they head up the Seine for Rouen. Corinne is looking forward to revisiting this popular destination from the 2017 French River cruise. They return to Southampton on 6th October.

Then, on September 22nd Corinne will join the Black Watch at Liverpool for cruise W1821 which will set sail for Quebec. The ports include Killybegs in Ireland, St John’s in Newfoundland, and then several ports in Canada: Halifax, Charlottetown, Baie Comeau, Saguenay and Quebec where Corinne will then fly back to the UK on Saturday 6th October. The Black Watch will continue on to Montreal. 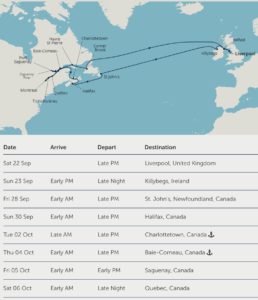 A Caribbean Christmas New Year Cruise then awaits in December. This is a fly cruise and Corinne will meet the ship in Bridgetown, Barbados. It will be a treat not to have to cruise across the Atlantic, especially in winter! This cruise, M1831, is back on the Braemar where Corinne will be adding some popular Christmas favourites to her eclectic recital programmes on piano, oboe, cor anglais and two saxophones. All being well, the airline company will oblige when it comes to the excessive luggage! The islands included in this tour are St Lucia, Grenada, Willemstad, Curaçao I. Netherlands Antilles, St Kitts, The Virgin Islands, Grand Turk, Turks and Caicos Islands, Philipsburg, St Maarten in Netherlands Antilles before heading back to Bridgetown in Barbados. They return to the UK on January 3rd 2019.

Corinne hopes to meet up with many old cruising friends and to making new ones onboard! 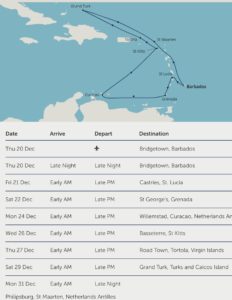