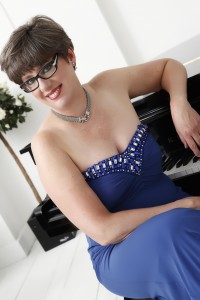 Zimbabwean-born pianist, Corinne Marsh, received her early musical training in Harare at the Zimbabwe College of Music, studying piano and oboe with Jeanette Micklem and the late Neil Chapman. During her studies she won numerous awards and scholarships including the Young Musician of the Year when she played Grieg’s Piano Concerto with the Leningrad Chamber and Harare City Orchestras. Corinne also took part in several masterclasses with artistes such as Leslie Howard, Mikhail Voskresensky, Liz Wolff and Liliana Maffiotte.

Later Corinne gained Licentiate Diplomas from the Associated Board of the Royal Schools of Music in both piano teaching and performance. On the strength of her achievements, she was awarded the coveted ABRSM scholarship to study at the Royal Academy of Music in London, an honour as this scholarship is only awarded once every two years to a musician from any African country, excluding South Africa.

Whilst at the Academy, Corinne studied piano performance with Piers Lane, Christopher Elton, Philip Jenkins and Ruth Harte, as well as oboe with Nigel Shore and Sue Bohling. She later graduated with two LRAM diplomas in piano and oboe teaching, as well as gaining the Professional Piano Performance Certificate with Honours.

Since then she has performed regularly in solo recitals, concertos, chamber music ensembles and as an accompanist of both instrumentalists and singers throughout Zimbabwe, the United Kingdom and internationally.

Corinne has played oboe and Cor Anglais in the Newbury Symphony Orchestra as well as the Symphony Orchestra of All Souls, Langham Place. With her musical interests expanding to include music in the traditional jazz idiom, she now also plays tenor and soprano saxophones and will be taking her show, “Ebony, Ivory and a Touch of Bronze”  to a number of venues and on cruises.

Corinne has also enjoyed a successful teaching career as Head of Keyboard at Downe House School where she worked for eleven years. Prior to this, she taught piano and oboe in a number of schools in Knightsbridge and Holland Park, London.

Since July 2000, Corinne has worked as an examiner for the Associated Board of the Royal Schools of Music, a position which sees her travelling around the United Kingdom and Internationally.

Her other interests include photography, squash, cycling (track and sportives) triathlon and cookery. In June 2016, Corinne took part in the Staffordshire Ironman 70.3 in June 2016.

Welcome to the home of “Ebony, Ivory and a Touch of Bronze”